You are an enthusiastic snowboarder and love the certain kick on the mountain? We offer a wide range of snowboard boots of well-known brands for men, women and children in various designs and colours. Our boots are made of high-tech materials and have almost all comfortable lining, an ergonomic footbed and easy-lacing systems. They are also light and comfortable, but at the same time stable enough to guarantee you a safe descent. During development, great importance is also attached to a modern and stylish appearance that makes the snowboard boots look good not only on the slopes. Convince yourself in our outdoor online shop! » Find your perfect snowboard boot

Snowboard boots are an essential piece of equipment for snowboarding. The boots are attached to the snowboard binding and thus form the link between foot and board. Ideally, snowboard boots should provide grip, be comfortable, warm and fit the rider's riding style and area of use. Basically, a distinction can be made between soft boots and hard boots. The hard boot consists of an inflexible shaft and hard plastic materials, which is why they strongly resemble a classic alpine ski boot in terms of construction and feel. This snowboard boot offers the rider a lot of support, but restricts mobility in the ankle. For this reason, hard boots are the best choice for racers, carvers and all-mountain riders who need maximum control and safety when turning and racing. The hard shaft allows edge pressure to be built up directly and therefore enables fast edging and cut turns. This snowboard boot is perfect for high speeds and low drift percentages. When carving, you can use the entire width of the slope. If you want more flexibility of the snowboard boot, soft boots are recommended. These boots are softer and more flexible and suitable for all those who have freestyle or freeride at heart. With them, nothing stands in the way of trick riding, jumping and sliding. Due to the higher freedom of movement, walking without a board is also more pleasant. 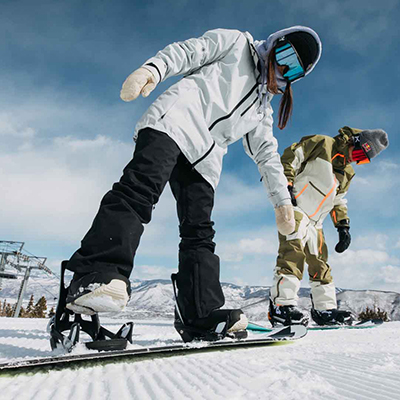 What does the flex number mean?

The flex indicates the degree of hardness of the snowboard boots. The higher the flex, the harder and more aggressive the boots are; the lower, the softer the snowboard boots are. You can choose between boots from soft to medium to stiff. Likewise, you can rate the flex on a scale of 1-10. We distinguish the following flex grades:


Which snowboard boot is chosen, of course, depends on personal preferences as well as the respective skills of the snowboarder.

What lacing systems are there?

There are various lacing systems for opening and closing snowboard boots. To make the most of your time on the slopes, lacing your boots should not take too much time. We would like to introduce you to the most popular systems:


General statements about the best lacing system cannot be made. Here again, you have to try it out individually to find the best solution for yourself. Try to think about possible areas of use and properties that are important to you in advance. 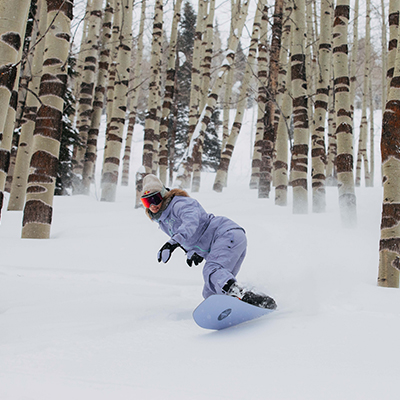 How should the snowboard boot fit?

As a rule, you have the same size for a soft or hard boot as for normal leisure shoes. Note, however, that the shoes of some brand manufacturers can be larger or smaller and therefore differ from the normal case. When trying on snowboard boots, please wear functional socks only. Normal leisure socks are thinner, wool socks are thicker - it doesn't matter, both socks would distort the fit. The snowboard boots fit perfectly when the big toe slightly touches the shoe tips at the front while the body posture is upright and the legs are stretched out. If you get into riding position, meaning knees slightly bent, this contact should no longer exist and your heel should arrive at the back. Your entire foot slides back a little. As soon as the heel has the opportunity to slide upwards, the snowboard boot is too big and can in the worst case lead to blisters and unpleasant chafing. If the snowboard boot presses, take it off immediately and do yourself a favor. Very important: take your time when trying them out. With snowboard boots that are too stiff and not flexible enough, the fun of snowboarding will be lost. So you need boots that fit comfortably and follow every movement during an action-packed day.

How should I lace the snowboard boot?

Very important: snowboard boots should not be tied too tightly and not too loosely. In the worst case scenario, the first can impair blood flow to the feet and lead to numbness. The latter variant puts more strain on muscles and ligaments, as they have to compensate for all the impacts that the boot does not hold. This can become quite exhausting in the long run. Therefore, you should consider your personal preferences when choosing the lacing system and select a system that you can easily operate and readjust. With a little practice, you will quickly find the right dosage.